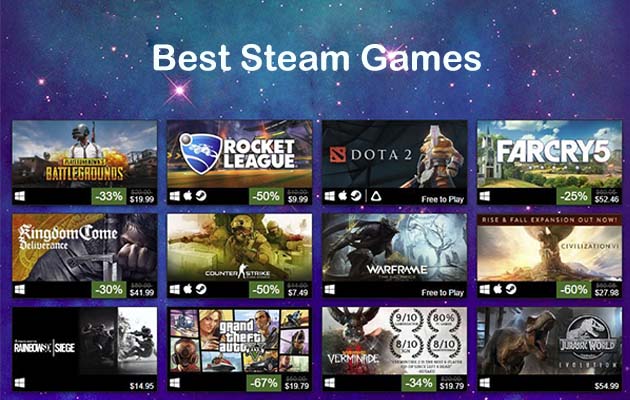 If you are playing these games on your PC, all you need to do is download and install them. But if you are lucky to own a steam deck, then you might want to check Valve’s Game Compatibility list to see if your titles of interest would work in the Proton-enhanced, steamOS environment, or need some extra additional actions on your end.

With time the best games on the Steam platform shuffles as a new one comes in. so at the time this article was written, these games are some of the bests you can find on the platform. They include:

This game is a detective RPG that is not necessarily a manifesto, but it says something. Disco Elysium delivers a lot of thoughtful political criticism, but do not mistake it for ho-hum centrism.

This game is a free-to-play multiplayer online battle arena (MOBA) game that tasks you with choosing more than 100 playable Heroes to take to the battlefield, utilizing the character’s unique abilities, Play Style, and attributes in other to help your team achieve victory.

This game is great as it features you sneaking and fighting your way across military installations in Afghanistan and Africa.

The Monster Hunter Rise makes the jump from Nintendo Switch to PC, offering an excellent, creature-killing action that tops 100 frames per second. Just like its counterpart on consoles, Rise on PC features Yokai-inspired monsters, fresh mobility options, and large hunting zones filled with collectible goodies for upgrading your custom warrior.

This game features brutal weaponry in the third-person shooting action, which includes chainsaw-assault guns and spear-tipped rifles, that can be used to melee or blast the locust Horde into bloody lumps.

The developer’s Arc system has worked to streamline Guilty Gear’s fighting in other to make it more newcomer-friendly while retaining the much older games’ creative richness.

Strive features fewer modes than its predecessors, but there seems to be a lot to love in this PC game, which includes amazing visuals, impressive character play styles, lag-free and more.

Tekken 7 revealed secrets and leaves cliffhangers, thus simultaneously answering long-standing questions and prompting the fan base to as for new ones.

In the game, Geralt grips his swords for the last time in search of his surrogate daughter, Ciri. The game design techniques that developer CD project Red employed made the third mainline Witcher game one of the best RPGs ever created.

The monster Hunter world has received some enhancement by capcom, plus streamlined gameplay and made tons of quality-of-life adjustments.

Ori and the Will of the Wisps

The Ori and the Will of the Wisps Fall Squarely into the latter category of Xbox Games. The will of the wisps came with more impressive compared to the Ori and the Blind Forest. This game entails a darkly beautiful world made of thought-provoking levels and offers you the tools you need to move through the environments with unparalleled grace.

This game features a violent story concerning the death of the old west. In the game, you would control Arthur Morgan, a man who belongs to an outlaw group and is disillusioned by the criminal lifestyle.

This game is the newest baseball game from metalhead software. this game features cartoony showboats flexing their super-sized biceps, and pitcher-batter matchups are tense games of cat and mouse.

There are more amazing games to get from steam like Elden Rings, God of War IV, Horizon Zero Dawn, and more. the platform never fails to deliver.

No comments to show.